With Making Movies done (bar any bug-fixes, and possibly an OSX port), I have started looking at the next game. I really enjoyed working on MM, so I figured I'd enhance the engine, come up with a new setting and build another game. I can't start a new itch.io page until I've got a build  to share with you  (which is hopefully soon), but I thought I'd post a couple of articles here about the development process.

With Making Movies I reused assets from Honey Select (Illusion games). They look great, but obviously that's not a great idea for a commercial project (even if it's just a patreon attached, or a tip-jar on Itch).  So the first thing I decided was to go with DAZ for this game. I guess I could have gone 2D, but I'm no artist :)

Secondly, I liked how the slight idle animations on characters made them come to life.  So I decided to see if I could extend that to the mugshots (the head profile in the bottom screen). So  that's what I spent the weekend doing.

1. I pose and render the character in DAZ. In this case, it's Emily Pendragon, one of the leading ladies.

2. I then bring the assets into Spine2D, an animation package (this is the same as what I did for Making Movies). Here's Emily getting ready for her first date

3. For Mugshots it's actually a little more complex; they're composited with multiple different chunks, so I can get blinks, emotions, etc. Here's a first pass character test for Emily

The animation is exported out as a sprite sheet + keyframes (sorry, she doesn't look as cute here). This means that several minutes of animation is still only 1.5MB (the bulk of which is the sprite sheet) 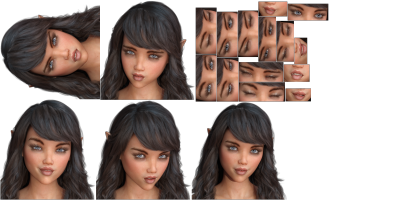 Finally the character is loaded into Unity, and hooked up to the character and dialog system, so her emotions on-screen match the dialog.

Love of Magic is currently in early testing; the first 45 minutes or so of gameplay are in, and there's a working magic system. If you want to be an early beta tested, let me know!

Adult Business Sim / Visual Novel on making pornography, finding love and getting even.

I do hope you will provide linux and osx exports of your game, since it seems you are using unity :)

I'd love to. I've actually got an OSX build of the latest Making Movies (0.9.13), but since I don't have a Mac around, I can't test it. If anyone wants to volunteer, I'd be happy to drop a link for them.

Linux.. I've never actually tried. I did android (since I have an android phone), and in theory unity should work out of the box. But Theory is the kind of girl I'd never bring home to meet my mother, so... again, if I find a helpful user that wants to test it, I can certainly order Unity to spit out a Linux build.

I can test it for you, if you'd like. And you can always try with a VM first, for things like just testing if it runs a VN can be quite handy :)

Added the OSX build to the project page; check it out and let me know if there's any problems.